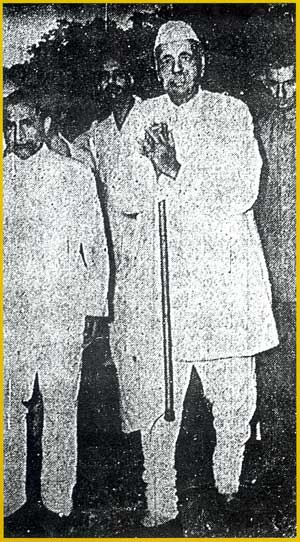 on Saturday, 24th October 1959 by Union Home Minister Pandit Govind Ballabh Pant. The event by all major newspapers. Here is the excerpt from Hindustan Times dated October 25th 1959. Laying the foundation stone of the new building of the Maulana Azad Medical College on a 30 acre land Pandit Pant paid a great tribute to Maulana Azad. The Home Minister said Maulana Azad was one of the greatest patriots of the counter who combined statesmanship with profound scholarship. His memories would inspire his countryman for his long devotions to the service of humanity.Referring to the fact that on the site previously occupied. By the central jail, Pandit Pant said this shows that new India is emerging and the place which was a symbol of sufferings was to become a place would now help to relieve it.In a sharp contrast to welcome song presented by the students of the campus, Pandit Pant considered (it) lacked in poetry. The Home Minister used his style of poetic language when he said the "dismal walls of  complex had to with corridors illuminated by the of light, science and knowledge".Pandit Pant recalled his many years in various jails and said, “I did not much by going there again and again”. He was replying to the grievances of the students in the former jail. to be ready in three stages nearly Rs. One Crore.